not your typical dinosaur cake 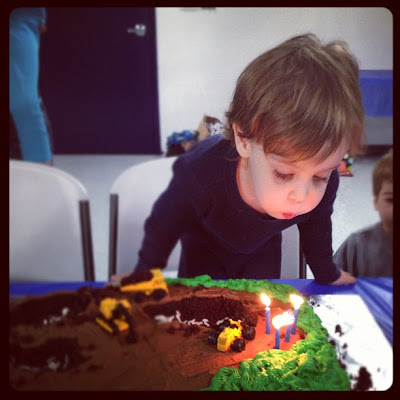 My son recently turned three.  This is when the strangers really come out of the woodwork. They take one look at my son's hazel eyes and just swoon over his unbelievable lashes.  Oh will you just look at those eyes, they say.  He is really going to give those girls a run for their money, they continue. They ask how old he is and then follow it up with a clasping of the hands, a tilting of the head, and all of those falsely nostalgic memories swimming to the surface of their minds, erupting in huge sighs and a great big, "ohhh, don't you just LOVE this age?"

I say falsely nostalgic, because they obviously don't have very good recall.

Terrible two has nothing on three.  At two, my son's language skills were just starting to develop, so his frustration would usually culminate in screaming or crying tantrums.  I would give him a minute to release his angst, and he would come around.

So these days, his frustration ends up with scathing, indignant, dastardly remarks that chip away at my heart, eyelashes or not.  Yeah, lady, I really just LOVE this age.

But then suddenly, as quickly as it had started, he looks up at me with those beautiful hazel eyes like big sage green marbles flecked with gold, those feathery lashes directing his gaze toward mine, and he says in a quiet little voice, "I'm sorry mama."  Then he falls into my arms, buries his face into my neck, gives me a long, satisfying squeeze, puts his hand on my face and asks, "are you happy, mama?"  "Yes, lovey, I'm very happy."  "I love you so much mama.  Stay with me all day."

Ok fine.  I really do love this age. 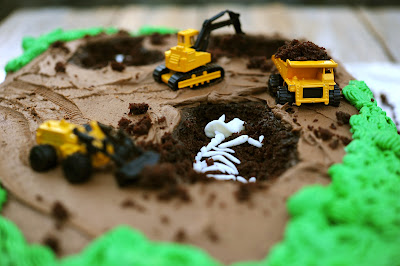 And I am really getting into this whole cake making thing.

For my daughter's birthday, I made 3 cakes because I couldn't decide which one to do.  I also had three ideas of how to decorate.  It was a very indecisive day...  Fortunately, they all turned out pretty well, and we didn't have any leftovers.  The yellow cake was a spur of the moment happy accident which was extremely fun to do.  And to be honest, I really just love frosting (working with it as well as eating it!) 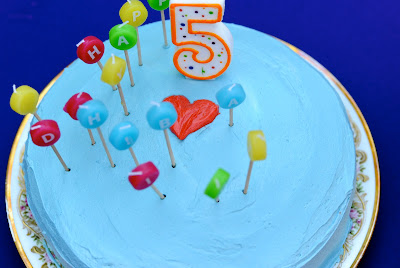 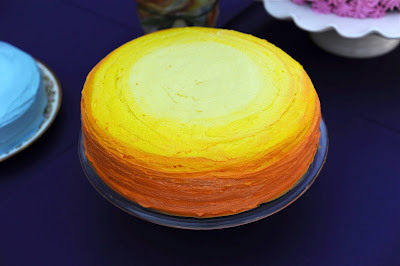 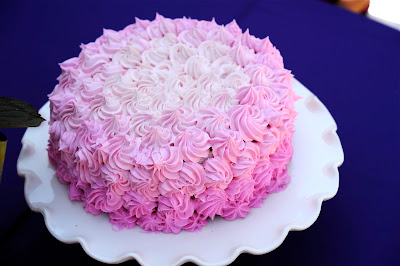 But for my son's cake, I knew exactly what I wanted to do.  Dinosaurs!!  I grabbed a sheet of paper and started to draw.  I had a lovely scene with a couple of brontosauri wading in a compositionally placed pond, with other recognizable behemoths roaming the frosting-ed terrain.  Oh, I'm sorry, apatosauri- the brontosaurus isn't actually a dinosaur anymore.

What was that, you say?  You didn't know that the brontosaurus was a fraud?  Well see, here is a little tidbit of information that really sets mama makes from scratch apart from the rest.

Way back in 1874, a remarkably complete skeleton of a brontosaurus was discovered.  The only problem is that it had already been discovered and named apatosaurus.  The previous more incomplete skeleton was from a juvenile apatosaurus, leading scientists to believe one was a smaller and completely different dinosaur.  This discrepancy was unveiled in 1903. They kept the brontosaurus name though, as a synonym.

And then, the Flintstones.  (This is my hypothesis, which will remain untested.  By me, at least.)

It may have been their brontosaurus pet, Dino, and their constant consumption of brontosaurus burgers at the drive in (which I never really thought of as being completely disturbing, but they are, in essence, eating their beloved pet), that set the scientific community on its ear to officially remove the name brontosaurus from the books in 1974.

The big scandal came in 1989 when the post office released a set of dinosaur stamps:  the t-rex, pteranodon, stegosaurus, and brontosaurus.  The public was outraged!!  Then they went on to (and here's my favorite part) accuse the post office of "fostering scientific illiteracy."  Oh, the horror! 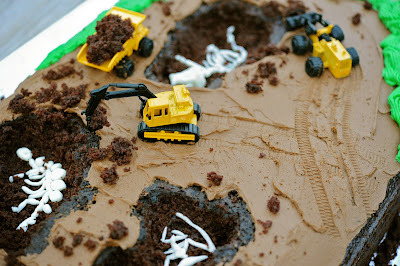 Well, as you can see, the apatosaurus does not make an appearance on this cake.  My husband took one look at my drawing and put in his two cents.  "How about you add construction trucks to the scene, like a dig?"  Sheer genius.  I took it one step further and actually dug into the cake.  If I'm going to make an excavation, I really wanted it to be excavated.  And how excited was I to make the skeletons....  I found a recipe for marshmallow fondant, grabbed some of Ian's trucks, and set to work.  I can't wait for the next cake...... 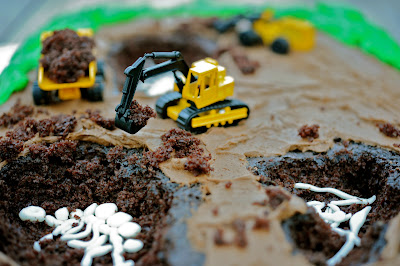 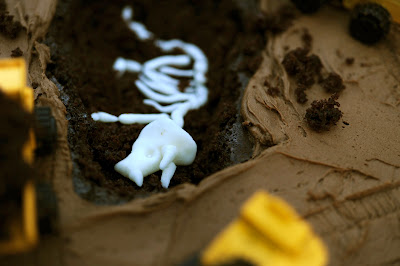 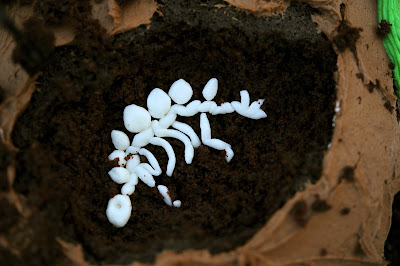 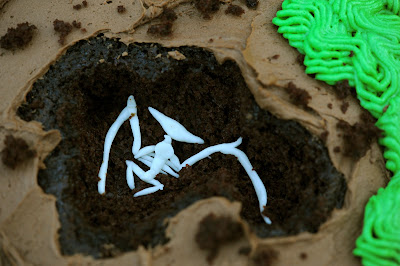 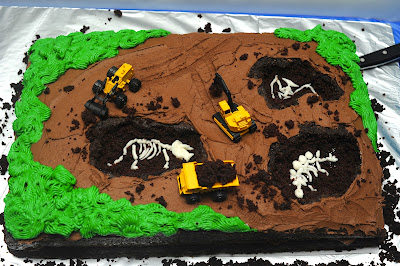 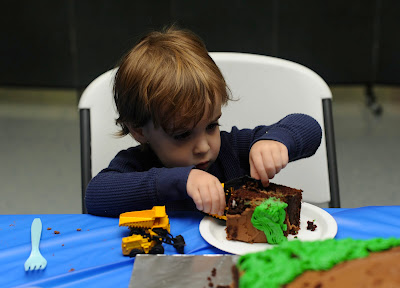 This recipe makes enough for a double decker 9" cake.  I think for this giant double decker sheet cake, I had to double the recipe for each layer.  So I had to increase this recipe 4 times for my son's cake.  His third birthday cake was a quadruple cake...

Sift the dry ingredients into the bowl of an electric mixer and blend on low until combined.  Combine the buttermilk, oil, eggs, and vanilla.  Add wet ingredients to the dry, slowly on low speed.  With the mixer on low, very slowly add the coffee and blend until just combined.

Pour the batter into the pans and bake for 30-35 minutes, or until a toothpick comes out clean.  Cool in pans for about a half hour, and turn out to a cooling rack to cool completely.

Combine the butter and sugar in the bowl of a stand mixer on medium low speed.  I usually drape a dish towel over top to keep the sugar from blizzarding all over the counter and on my person..  Once a ball is formed (this should take a few minutes), turn the mixer to low, and add the soy milk/vanilla a little bit at a time.  Mix until thoroughly combined, turn the mixer to high, and whip it up for about 10 minutes, stopping to scrape the bowl if needed.  Then add coloring, a drop at a time, until the desired color is reached.

Sift the cocoa powder, sugar, and cinnamon together into the bowl of a stand mixer.  Add the butter and follow same directions as above.

1 bag mini marshmallows
2 tbs water, adding more if needed
2 lb bag confectioners' sugar
Crisco shortening- you'll just want to keep the lid off so you can scoop it out.  Or if you are more hygienic than I, you could put about 1/2 c. into a bowl

Place a heat proof bowl over a pot of simmering water.  Melt the marshmallows and water in the bowl, stirring occasionally with a rubber spatula, until melted.  Mix in about half of the confectioners' sugar, a little at a time, until you reach a stirring impasse.  You want it to still be malleable, but stiff enough so that it is difficult to stir.

Grease your hands and the counter with the crisco until you have a nice coating.  Turn out the marshmallow mixture onto the crisco, and knead the same way as bread or pasta dough.  Knead the mixture for about 10 minutes, adding more sugar if the dough becomes sticky.  Re-grease the counter or your hands as needed.  If the dough starts tearing, just add some water, a few drops at a time, and knead it in.  Just like pasta or bread dough, the ball will become smooth and elastic after minute 8 of kneading.

Once you are satisfied with your dough, form it into a ball and tightly wrap it in plastic wrap.  I then put the wrapped ball into a ziplock bag and tried to get out as much air as I could.  I then put it in a cool, dark place overnight.

When you take out your dough to make figures, you may have to knead it a bit to get it going again.  If it seems too soft, sprinkle it with some sugar and knead it in.

For my cake, I used the fondant as is, but if you want to color it, you can knead in food coloring as you need it, or you could make the shapes first and then paint them with some food coloring mixed with water and a brush.  That is my next project......
Posted by Marla K at 8:21 PM