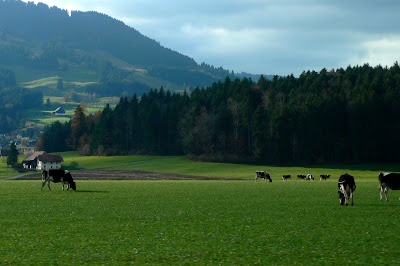 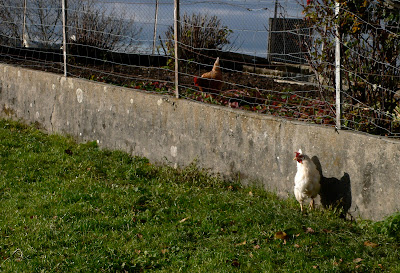 Last night in the grocery store, I needed to buy some bread.  I looked at all of the prepackaged loaves on the shelves.  To my absolute surprise, there was not a single loaf that didn't have some form of dairy in it.  No problem, I just went to the bread counter.

I have been buying bread from this bread counter almost weekly for over two years.  I have seen the ingredients list countless times.  I have talked to the day staff in great detail not only about the ingredients in the bread, but also about the cross contamination risks.  The day staff is wonderfully patient and knowledgable.  The night staff?  Not so much.

The woman behind the dude spoke up.  "The only breads with dairy are the challah and the split top country white loaves."  I was surprised to hear that, since we get the challah regularly.  I asked if they had changed the recipe.  It never had dairy in it before.

"The recipe hasn't changed.  It has always had dairy."  "No," I replied, "I have seen the ingredients list.  It hasn't."  She stopped what she was doing, squared her shoulders to face me full on, exasperatedly tilted her head to one side, put her hand on her hip, took an exaggerated breath and drawled, "It has EGGS in it."

Really guys?  You are in the food industry, and you don't know the difference between a cow and a chicken??

Oh, who am I kidding.  I would have gone back anyway.

I couldn't help myself.  Before I knew what was happening, I had on my best talking to a two year old voice.  "Dairy comes from coOOows.  It includes milk, cream, butter, and cheese.  It is anything that can be made from a mammal's milk.  MAMmal.   Eggs are from CHICKens.  Do chickens produce milk? Are chickens mammals?!  No, they are not.  Just because they are in the same section of the grocery store, does NOT mean that they are the same thing."

As soon as the words were out of my mouth, I realized that I was not 8 feet away anymore.  Somehow I ended up leaning over the counter.  My top half seemed to stretch itself several extra inches, and I felt like a cartoon, but if I was indeed a cartoon, I would have been pointing a gangly knuckly pointy finger at the obviously stoned looking doofus cowering behind the register.  I was not, however, pointing a finger, and the obviously stoned looking doofus was not cowering behind the register.  But I found that my face was right up in his, my voice elevated but not quite yelling.  There may have even been a squeak or two.

His face was completely blank.  "Ok."

But not like a Thanks For The Information Ok or an I Feel Silly For Confusing Cows And Chickens Ok.  It was more of an I Really Don't Like My Job Because I Have To Deal With Crazy People Like You Ok.

So on and on I will go, continuing my crusade, educating the world about food allergies and the difference between birds and mammals.  Or maybe I am really just looking for an excuse to bitch someone out.

I haven't quite decided yet.

It's not hard to figure out where my daughter came from.  As they say, the apple does not fall far from the tree.....  Grace, as I am known to be called, has made her appearance quite regularly during my lifetime.  I have been known to trip over a shadow, walk into walls, walk into a flag pole causing the left side of my face to be speckled in black and blue, and simply turn my head into a stone wall, scraping and bruising the whole side of my nose. I wish I could say that these calamities occurred as a clumsy adolescent, but alas, these have all happened within the last month.

As an adolescent, my injuries were legendary.  Well, maybe not legendary, but definitely frequent.  Sixth grade:  fractured my left wrist while ice skating at a winter camp.  The science teacher from our school was on the trip, and he didn't believe me, so he didn't call my parents or send me to a doctor.  When I appeared in school with a cast on my arm... well... let's just say that he was verrry nice to me.  Seventh grade:  re-fractured my left wrist while skiing.  Eighth grade:  re-fractured my left wrist when my dad slipped on the ice and pulled me with him.  Ninth grade:  that's right- another re-fractured left wrist after Kyle tripped me in the hall.  It was a great trip though- books were sent flying and I barely landed on my wrist.  But because it had been through so much, I had a cast that lasted for months...  Tenth grade, early September:  tore ligaments in my left ankle from messing around at tennis team try-outs.  I had a cast for six weeks. Tenth grade, March:  tore ligaments in my left ankle after a perfectly spiked ball during pre-game volleyball warm up. Totally lame.  Who cares about pre-game warm ups?? Another cast for six weeks.  Same year, July:  broke my left foot from jumping off of a curb.  Another six week cast...

Well, fortunately I'm not THAT clumsy anymore.  I just walk into things these days... 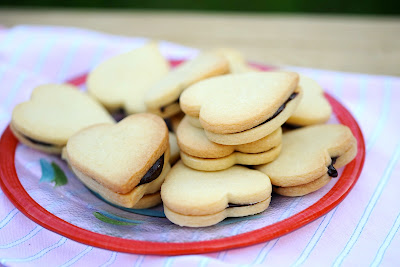 Like I mentioned earlier, these cookies were made to put a smile on my daughter's face. The hearts were absolutely necessary.

This cookie is unusual in a couple of ways.  First, it is a basic sugar cookie, but it is made with confectioners' sugar instead of regular ol' granular sugar.  I had never thought to do that!  It produced such a lovely, light, crisp deliciousness that I plan to make over and over and over again.  The second unusual ingredient was substituting cream for the chocolate with coconut cream.  Well, it's not unusual for me, I use coconut cream all the time, but getting the cream is unusual- you put a can of coconut milk into the refrigerator for about an hour and scoop out the solidified cream from the top.  You can use the coconut water in those morning shakes that are becoming so popular these days. 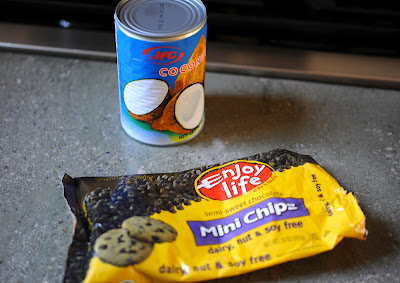 But the regular fat coconut milk cream looks like this.. 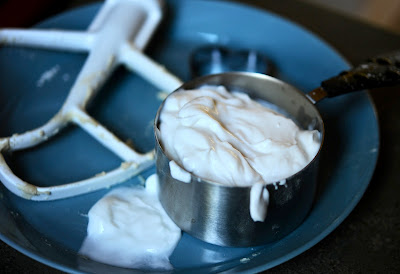 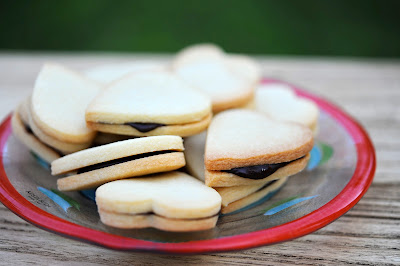 Combine butter and confectioners' sugar in bowl of an electric mixer set to medium.  I will usually put a towel to cover the mixer to avoid the inevitable confectioners' snowstorm.  Add vanilla and mix until creamy.  Turn the speed down to low, scraping the bowl.  Add the flour, a bit at a time, and mix thoroughly.

Pat the dough into two flattened patties, and wrap tightly with plastic wrap.  Refrigerate for about an hour.

Lightly flour work surface and roll out dough to about 1/4-inch thick.  Cut out shapes with cookie cutters and place on ungreased cookie sheets.  You can re-roll the scraps, but be careful that you do not overwork the dough.  Bake 16-18 minutes or until firm.

Meanwhile, prepare the filling.  Heat the cream in a small saucepan but do not boil.  Remove from heat and add the chocolate chips.  Give it a stir, and then cover for about 15 minutes.  Stir until smooth, then transfer to a bowl.  Let cool to room temperature.

Lick the spoon, and then put your finger into the bowl and clean that out as well.  Or, if your prefer, you may clean out the bowl by using the cookie sandwiches as a scraping tool.  I won't tell.

Now you are ready to finish off the cookies.  Oh, and don't forget to save a few for your daughter, for whom you made the cookies in the first place.  I don't think she would ever forgive you if you didn't....
Posted by Marla K at 5:03 PM No comments:

A good friend of mine sent me to check out Savorfull's facebook page (thanks again, Amy!).  I didn't know what it was, but because my life has been revolving around food allergies, she thought it was extremely pertinent.

I quickly went to the website, and man.  What a fantastic company!  Savorfull is a food delivery subscription service that sends out a sampler box of allergen free foods each month.  They are a very new company, and the plan is to be able to customize each box to the subscribers' food sensitivities.  Currently, all of the products they send out are wheat, gluten, peanut, and dairy free.

I was very excited when my own box arrived.. 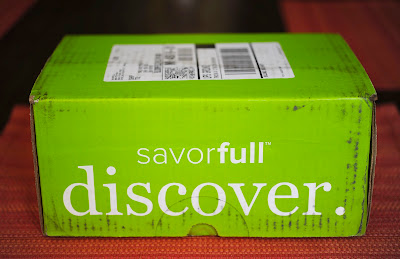 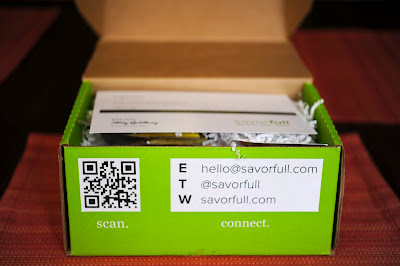 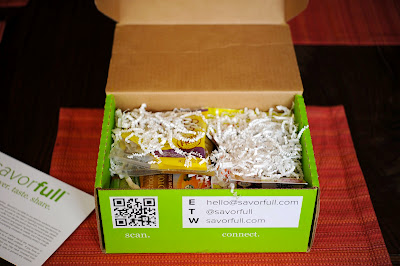 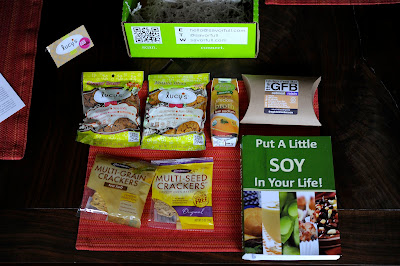 It was filled with all kinds of goodies.  Delicious cookies, a gluten free bar, crackers (I still insist that everyone with allergies read all of the ingredients, as both bags of crackers contained sesame seeds.  Delicious for me though!), chicken broth, and a soy cookbook.

Having a kid with food allergies is challenging enough.  But with a company like this, that finds allergen free products and ships them right to your doorstep, it not only makes my research into what's out there relatively non existent, but it also gives me hope.  If a company that deals solely with food allergies can thrive (and I'm not talking locally in Michigan- their national and overseas markets are really taking off), that opens the eyes of businesses everywhere.  The prevalence of food allergies is only increasing.  And people are starting to pay attention.