Wow, I haven't posted in quite a while.  I wish I had some exciting reason for being so absent, but, alas, I do not.  I have been tired and, quite frankly, lazy.  For some reason, the kids have decided to wake up anywhere between 2 and 4 almost every morning, alternating between the two.  It's almost as if they have coordinated their schedules..  Bad dreams, puke, wind, no clothes, twisted clothes, too many clothes, and my personal favorite "I just love you so much I need to be closer to you".  At 3 in the morning....

It has been cold, and then warm, and then cold, and then VERY cold.  I have been cold weather nesting (which is code for sitting in front of the fireplace and playing games with the fam), and if that's not enough to keep me from posting, get this:  my tripod has been ALL the way in the other part of the house.  A whole THREE rooms away, if you can imagine..

So I'm sure that you understand my not being able to post.  I am happy to say though, that I have indeed made some stellar meals: sushi, beef barley stew, chicken noodle soup, asparagus and mushroom risotto, chicken and waffles, roasted chicken and veg...  The list goes on and on.  And last night, all of this culinary deliciousness culminated in my grandest, most adventurous masterpiece of all time:  buttered egg noodles, with sides of bacon and peas.

Too bad I didn't take pictures of that one, huh.

But fret not, this is well worth the wait.  Skillet baked french toast. 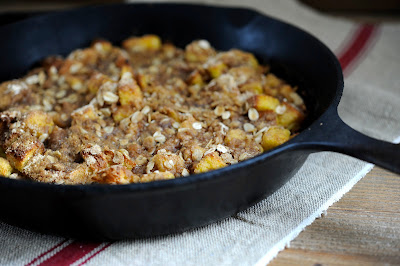 I wanted to use up the last of an almost stale challah loaf and an almost stale whole wheat loaf and baked french toast seemed like a great answer.  The problem though, is that almost every recipe I found asked that the bread be soaked overnight.  I am not an overnight soaker kind of person.

Let me rephrase that.  I am not that organized, to have breakfast planned the night before.

My other concern was that I didn't want to spend 45 minutes making breakfast, since many of those recipes took that long to cook.  My answer?  Pull out the skillet. 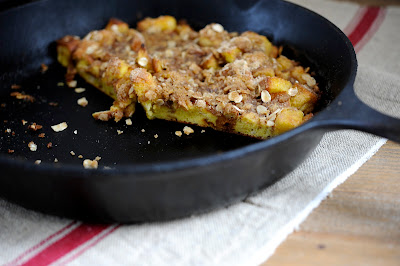 So back to the french toast....

I decided to put that skillet to good use, and what good use it was!!!  It gave the bottom a delicate, delicious, golden crust which was exactly what I was looking for.  And the best part?  It only took 15 minutes in the oven.  Perfect. 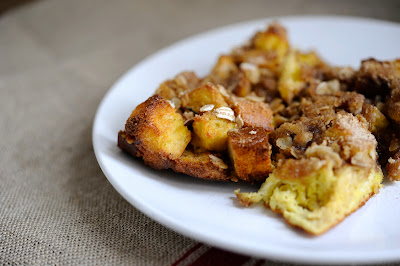 In a bowl or large plate, combine the eggs, milk, and vanilla extract.  Dump in the bread, and stir to coat.  Leave the bread in the bowl, stirring every once in a while, so the bread really soaks up the liquid.

Heat the skillet over medium to medium high heat.  While the skillet is heating, combine the topping ingredients in another bowl until crumbly, and set aside.

Bake, uncovered, for about 15 minutes, or until the top is bubbling and golden.